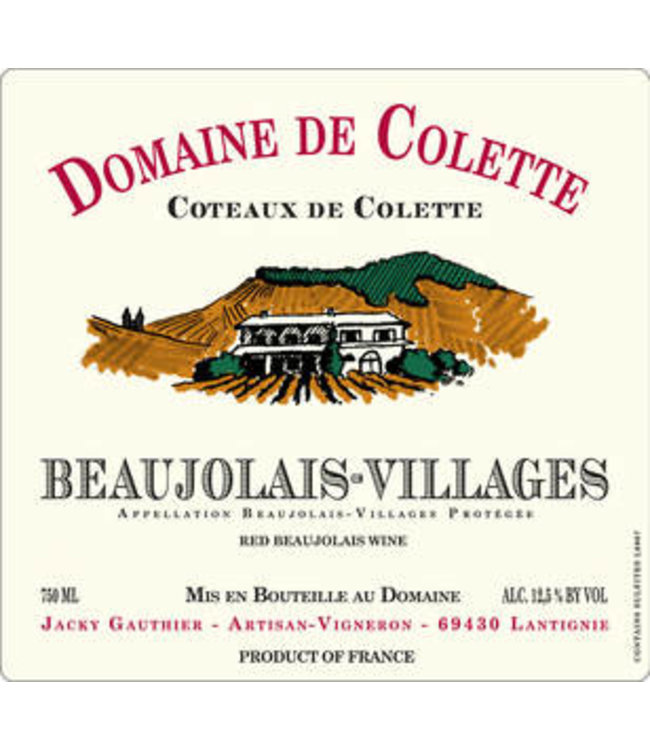 Lantignié, Rhône
Domaine de Colette is located in the small village of Lantignié, regarded as the top village in the cru of Regnié, and less than 1 kilometer from the border of Morgon. It is owned and run by the humble Jacky Gauthier (with his wife Evelyne), whose family has been making wine for several generations. It was his father René who officially created Domaine de Colette in 1953. Gauthier began studying enology in the late 1970’s at the tender age of 17, planning to work with his parents’ on their then 8 hectares of vineyards. Meanwhile, in 1980 he got an offer from an uncle to help him work his vineyard, which he gladly accepted, and in 1984 was able to buy that vineyard and make wine from both family vineyards. His father passed away a decade later and he created one domaine encompassing all the family vineyards.

Domaine de Colette Beaujolais-Villages “Coteaux de Colette”
This comes from steep pink granite vineyards with an average age of 45 years—but one of the plots, called Colette, is 80 years old. The grapes undergo carbonic maceration followed by a gentle pressing. A pleasant ruby-red color, this wine presents small red fruit aromas and flavors in its youth, but over time these evolve into surprisingly complex ripe, even jammy, fruit flavors. Excellent companion to charcuterie, red meat or local cheeses.

Evolves into surprisingly complex ripe, even jammy, fruit flavours when permitted to breathe.