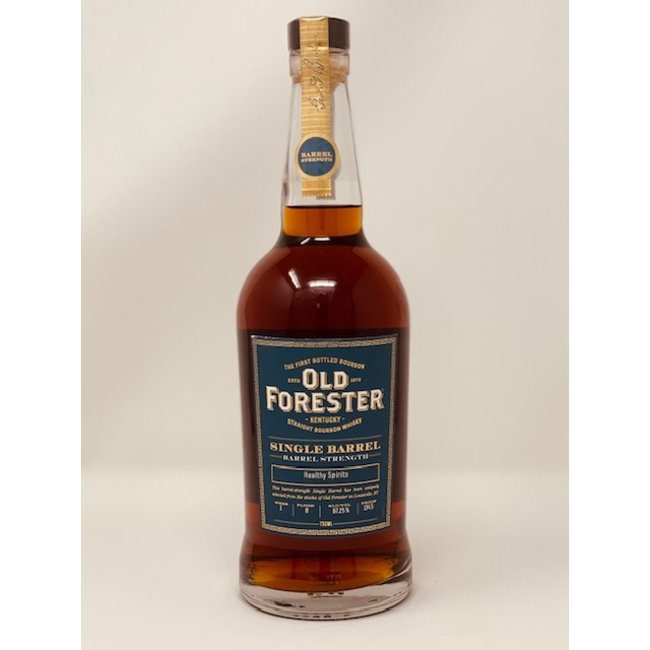 Old Forester is among the classic American Kentucky bourbon brands. Owned by
Brown-Forman Co.—which also owns the likes of Jack Daniel’s, Woodford
Reserve, BenRiach in Scotland, Finlandia in Finland, and many other spirits brands
world-wide—the Old Forester name dates back to 1870. It was among the six
distilleries that continued to make whiskey during Prohibition—legally, that is,
under a license “for medicinal use only,” wink wink—making it the single longest
continuously running commercial American bourbon producer.
Currently Old Forester is likely most widely known among bourbon fans for their
commemorative Whiskey Row series, four bottlings each named after a year
significant to Old Forester or bourbon history: 1870, 1897, 1910 and 1920. These
standard releases defy bland connotations of the word “standard.” They each
feature special processes and/or bottling stats to bring out a unique emphasis in the
longstanding Old Forester bourbon mash bill.

Beyond the Whiskey Row series, the distillery’s annual Fall “Birthday” release is a
prized catch on the national bourbon unicorn hunting trails. In 2019 they
introduced a Rye to their portfolio, using a Normandy Rye recipe acquired by
Brown-Forman in 1940. This quickly became a mainstay among affordable, highquality rye whiskeys. In all its variations, the Old Forester brand holds true to its
reputation for sweet, flavorful whiskeys.
Old Forester is also a brand of many firsts. The brand was the first to be made
exclusively available in bottles rather than also in casks, thus better ensuring
quality at a time when any number of things might be added to a cask to “enhance”
the whiskey’s appearance or flavor, or simply to expand its volume. They were the
first to put out a “double barreled” bourbon, aged in one cask then finished for a
shorter period of time in a second. Take a moment to read the back label of this
Single Barrel bottle, and you’ll note another first:

Old Forester has offered a single barrel program for years. But it has only been
recently that they expanded that program to include barrel strength single barrels.
This is a welcome change for whiskey fans who value the opportunity to try classic
brands in as natural a state as possible.
Given “barrel strength” is not a legally defined term, some brands sporting that
label are nevertheless watered down to a consistent proof from release to release—
e.g. Old Ezra Brooks Barrel Strength at a uniform 117 proof, or now even
WhistlePig 10 Year Rye Single Barrels, which recently seem to all be bottled at 112.5 proof. But the Old Forester SiB Barrel Strength is a true barrel strength release, and the Healthy Spirits pick is a pretty strong example! Here are its basic stats:
Barrel No. – OF202004
Mash Bill – 72% corn, 18% rye,
10% malted barley
Age & Maturation – non-aged
stated (likely ~5 years +/-), in
warehouse 1, floor 8
Bottling Proof – 134.9

Our whiskey buyer, Nate Breed, specifically requested a barrel from the top floor of the warehouse. Why? Heat rises! This means that in a multi-story warehouse, the barrels aging higher up will experience more intense temperature swings. This forces the whiskey in and out of the barrel’s wood more than on the cooler, lower floors. It also means a higher evaporation rate, resulting in fewer bottles in the end but a greater concentration of flavor in what’s left.

Let’s see what that means in this instance. After letting it sit in a Glencairn glass
for 15 minutes (which I recommend to let the alcohol lift a bit) here is what I
picked up…
COLOR – a deep, rusty, russet orange
NOSE – Steamy! Approach slowly…!
Then comes sweet toasted honey,
drying maple syrup, cherry pie filling
in a well-baked pie, some nutmeg
and cinnamon, brown sugar and
dark oily caramel
PALATE – a toasted quality overall,
with caramel, dark cherry syrup, oak,
and now some baked apricot soaked
in its own sweet syrupy juices
FINISH – the cherry, some oak, a
kind of artisanal cherry bubblegum
(is that a thing?), and a flare of biting
heat that gradually relaxes into a
numbing warmth
OVERALL – a smoldering cherry pie
served up on a smooth oak plate
Sweet and fiery in its pure form—and delicious—this is definitely a candidate to
experiment with by adding drops of water, or pouring it over an ice rock big
enough to melt slowly and reveal layers of flavor. And it would contribute to a
very potent Manhattan, that’s for dang sure.
Old Forester is a brand I’ve always appreciated. In its many variations, it inevitably
delivers an old-fashioned fruit and candy sweetness—bourbon that tastes like what
one might imagine bourbon should taste. This single barrel is a great example.
The single barrel program used to feature bottlings at the standard-release of 90
proof. Those were dependably enjoyable. But the recent expansion to include
Barrel Strength bottlings offers drinkers the option to determine the proof they

enjoy most. Barrel Strength releases are an invitation to experiment and to explore.
With a brand as dependable as Old Forester, that’s a wonderful invitation.
After you’ve tried it yourself, with and without water and ice, stop by the store and
let us know what you think.
Cheers!
Mark