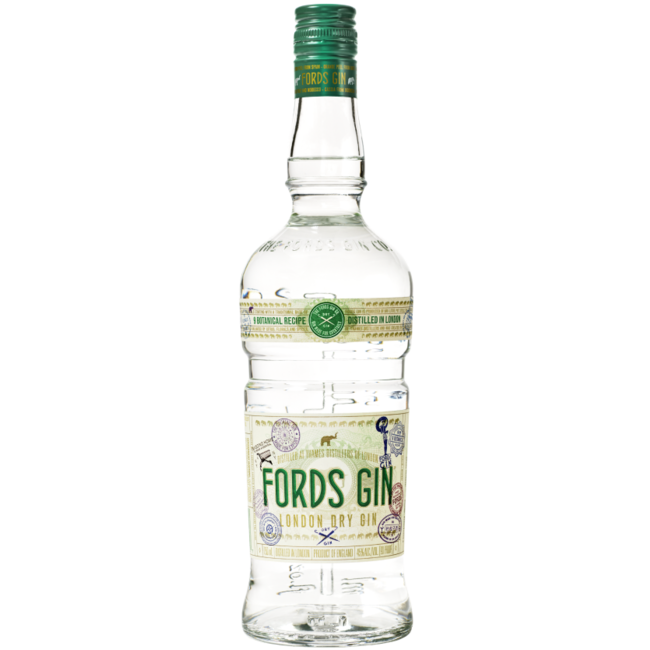 The most versatile well balanced gin on the market. Read more..

A blend of nine botanicals make Fords Gin foundational to all great gin cocktails. Steeped and distilled at London’s Thames Distillery since 2012, this award-winning spirit is now recognized by bartenders as the most versatile cocktail gin in existence.

Working in the world of spirits for over 20 years, founder Simon Ford realized that the ultimate cocktail gin did not exist. He set out to change this with the leaders of the craft cocktail movement – a small band of bartenders, distillers and professional drinkers. After various versions of a recipe, it was on attempt #83 that they cracked the code for Fords Gin. Today, the same blend of nine botanicals is heralded as The Cocktail Gin.

Gin is meant for mixing, be it a Martini, Negroni, or a Bees Knees. It is no surprise then that Ford's idea of the finished product wasn’t the spirit in the bottle alone, but also its application. This nine-botanical blend is expertly crafted for cocktails and recognized by professional and at-home bartenders for its outstanding mixability.

The nine botanicals that make up Fords Gin are steeped in stills for 15 hours to soften them and bring out more flavour before distillation. The botanicals release most of their oils during this process, giving Fords Gin weight and viscosity, one of its defining characteristics.

Fords Gin is distilled for five hours in copper stills crafted by the legendary John Dore still-making company for the Thames Distillery. Appropriately named Tom Thumb and Thumbelina, these 500-liter stills produce a 200-liter batch of Fords Gin each run.

After the distillation process, Fords Gin is shipped in bulk to Newbridge, Scotland, where the gin is cut with pure spring water, giving it its final layer of quality before bottling at 45% ABV.

The most versatile well balanced gin on the market.